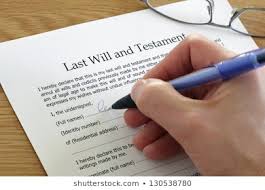 Besides seeking to draft or alter wills and trusts, many clients were changing trustees, executors and the agents they assigned to oversee their finances and health care, if they were unable to make decisions themselves.

After the initial shock of the COVID-19 pandemic, people now realize not just that they need to update their wills, but to change the people who have been named in important roles. In a recent article from The New York Times, “What to Know About Making a Will in the Age of Coronavirus,” one person said, “I think I still have my jerk brother as the trustee. I need to change that.” However, with social distancing now being the new norm, some necessary processes for executing estate plans are calling for extra creativity.

While lawyers can draft any necessary documents from their home offices, the documents need to be signed by clients and, depending upon the document and the state, by witnesses and notaries. These parties usually need to be in the same room for the documents to be considered legally valid.

New York’s governor issued an executive order last month that declared a disaster emergency in the state and temporarily gave notaries the authority to authenticate documents by videoconference. Other governors have also issued executive orders to allow video notarizations, including Connecticut, Iowa, New Hampshire and Washington. It’s safe to say that more states will probably permit this as time goes on.

Virginia was among the first states to allow electronic notarization, and I and other lawyers are lobbying Governor Northam to issue to issue emergency orders to address the need for relaxed rules for will and estate document execution. It is worth noting that living trusts are, in effect, will substitutes, and require fewer formalities to sign in Virginia, but other states have differing rules on that, as well. It is a challenge in every state to adopt new ways of practing law in the age of the pandemic.

However, besides needing notarizations, wills in New York State and other documents require two unrelated witnesses in the room when the document is signed. That also goes for the health care proxy, which gives a person the ability to name someone to make medical decisions on their behalf, if they become incapacitated.

One New York attorney used a video conference to watch two clients and their witnesses, located more than 100 miles away from his home office, sign new financial powers of attorney and health care proxies. He used his laptop to record a video of the proceedings, while clients used their phones. The client couple sat on the enclosed porch of a friend’s house in a distant county and signed the documents, while their friends stood six feet away. When the couple finished signing, they stepped away and their friends moved in to sign the documents, all in view of the attorney and all, of course, wearing vinyl gloves.

The documents were then scanned and sent to the attorney by email and he notarized them. They will also be mailed to him at his home, and then he will authenticate the documents.

In New Jersey, for example, notaries need to be physically present at the signing of documents. One lawyer took extra steps for two ER nurses, both single mothers and on the front lines of the coronavirus outbreak. He met them in the front yard of one of their houses, where a table had been set up and rocks were used to hold down the documents from blowing away in the wind. Everyone wore gloves and brought their own pens. One nurse served as witness for each other, and another friend was a witness for both. After each person signed, they stepped away, while another stepped up to the table.

Not every state is making changes to permit these documents to be witnessed and notarized, so there may be many new ways of executing estate plans in the weeks and months to come, including more outdoor, parking lot or front porch signings. Speak with your estate planning attorney, who will know the laws that apply to your state.

Reference: The New York Times (March 26, 2020) “What to Know About Making a Will in the Age of Coronavirus”

PrevPreviousScammers Beef Up Efforts in a Crisis
NextIf Not Now, When? It is the Time for Estate PlanningNext